This document covers the architecture of micro, design decisions and tradeoffs made.

Micro is a platform for cloud native development. It takes the concept of distributed systems and codifies it as a software design pattern using microservices and related primitives. The overall goal of Micro is to abstract away cloud infrastructure and to define a set of building blocks which can be used to write cloud services aka microservices, APIs or distributed systems.

Micro was born out of a pain with existing development models in the cloud. The majority of time has been spent coming to grips with complex cloud native infrastructure as opposed to software design. Cloud is in its infancy, predominantly focused on computing and infrastructure services. Development has largely lagged behind and there has been no vertically integrated solution to make sense of it all.

PaaS in prior generations like Heroku provided a full solution for web application development using Rails as the developer angle. As they and others iterated though, multi-language became an attractive solution and one that really muted its opinionated approach and diluted the overall focus of developer productivity.

Our focus is developer productivity and we see that as one achieved through constraints. Every dominant platform constrained itself to a specific model and then software exploded to leverage it. We think Cloud is much like Mobile in the sense that it requires an iPhone or Android like approach to managing its complexity. Cloud needs a development model, it needs an operating system and we think Micro can provide that through a completely vertically integrated solution.

Micro is Android for Cloud. PaaS 3.0. Or better known as a cloud operating system. As a framework Rails went far but it was incomplete without the likes of Heroku to host it. Spring fell short as well and was acquired by VMWare to try make sense of this platform model. We think Micro needs to take inspiration from Android, to encapsulate all the concerns of cloud, abstract away the hardware and define a sofware lifecycle, development and consumption model for it.

Micro is designed as 3 core components:

Micro services are defined as:

For in-depth material see the Reference. This doc will otherwise cover things at a high level.

Below is the architecture of the Micro Server which is composed of a number of independent services. Micro itself is accessed through a HTTP or gRPC API. Micro is runtime agnostic and provides plugin for running on many different architectures whether its local, kubernetes or beyond. 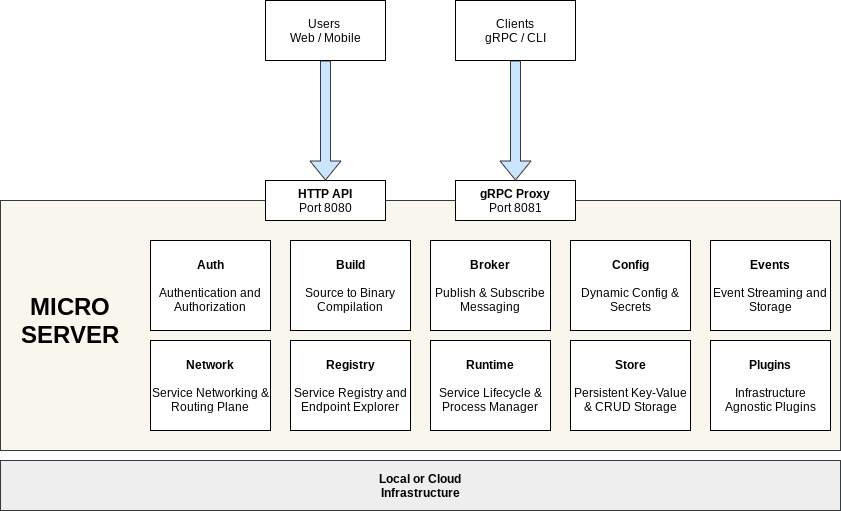 A Micro service makes use of a Go Service Framework which provides Go interfaces for accessing the services provided by the Micro Server. It also initialises your server to run on the underlying runtime and exposes your services via a gRPC server. Micro makes it so all you have to think about is the business logic.

The server acts as an abstraction for the underlying infrastructure. It provides distributed systems primitives as building blocks for writing microservices. We’ll outline those below. The rationale behind defining a single server is based on the understanding that all systems at scale inevitably need a platform with common building blocks. In the beginning this supports monolithic apps for building CRUD and over time evolves to firstly separate the frontend from backend and then starts to provide scalable systems for persistence, events, config, auth, etc.

The server encapsulates all these concerns while embracing the distributed systems model and running each core concern as a separate service and process. Its the unix philosophy done well for software composition. As a whole though micro is a single monolithic codebase after many separate libraries were consolidated and inevitably go-micro got folded into micro itself.

Clients are effectively entrypoints or forms of access for the Micro server. The server runs both an API gateway and gRPC proxy. The API is deemed as a public facing http api gateway that converts http/json with path based routing to rpc requests. The world still built around http and cloud services emerging with that pattern, it feels like this is the right approach.

The gRPC proxy is a forward looking entrypoint, where we see it as a way of extending the service-to-service communication to the developers laptop or other environments. At the moment it acts as a proxy for command line to remote environments.

The command line interface itself is deemed as a client and the defacto way to interact with Micro. We do not offer a web UI. The assumption is web is a context switch and we’d prefer developers to stay in the terminal. The CLI is extensible in the sense that every service you run becomes a subcommand. By doing so we take the API path based model and service decomposition to the CLI as well.

The final piece that is a continuous work in progress is gRPC generated clients which can be found in micro/client/sdk. Eventually they will be published to various package managers but for now are all routed in one directory. These are built from the protos defined for each core service within Micro, enabling multi-language access. We do not assume services to be built multi-language but consumption of Micro and services may extend outward.

The Go service framework is a core piece which comes from the original go-micro framework started in 2015. This framework offered core distributed systems primitives as Go interfaces and made them pluggable. With its complexity and overlap with Micro we decided the best thing was to merge the two and create a Service Framework within Micro to define the defacto standard for building Micro Services in Go. The framework provides pluggable abstractions with pre-initialised defaults. The developer will import and use any of the packages within the framework without any initialisation, they in turn speak to the micro server or basically the core services via gRPC.

For the developer, this is their main point of interaction when writing code. We employ a build, run, manage philosophy where build actually starts with putting something in the hands of the developer. Import the framework, start writing code, import various packages as needed when you have to get config, check auth, store key-value data. Then run your service using Micro itself. The server abstracts away the infra, the service is built to run on Micro and everything else is taken care of.

The services provided by the server are below. These are identified as the core concerns for a platform and distributed systems development. In time this may evolve to include synchronization (locking & leadership election), sagas pattern, etc but for now we want to provide just the core primitives.

The assumptions made are by building as independent services we can scope the concerns and domain boundaries appropriately but cohesively build a whole system that acts as a platform or a cloud operating system. Much like Android for Mobile we think Micro could become a definitive server for the Cloud.

Environments are a concept introduced in v3 which allow you to switch between entirely different deployments of Micro. The term ‘environment’ basically implies what we already understand as separate development or runtime environments whether it be local, staging, production or something by another name. You can think of it as a deployment of Micro targeted by the micro proxy which runs within every server.

Environments as a built in concept allow us to create a workflow that let’s us seamlessly switch between them using a single tool. In kubernetes this is known as contexts, in Micro we understand these as entirely separate running environments for our software. To us it just makes sense to build it in. An environment might be a deployment in AWS on managed k8s or multiple separate regional deployments identified be [name]-[region] or similar.

Environments are homed by the micro proxy for remote access. By default locally this runs on :8081 and you simply do micro env set local to have all commands run against it. The CLI proxies all commands to the micro proxy and in turn that send the request to the relevant services hosted by the Micro server.

Micro bakes in 3 environments by default; local, dev (free cloud hosted), platform (paid cloud hosted). The goal is to move beyond open source into something that seamless integrates the cloud for all developers everywhere.

Namespaces in Micro are a form of resource isolation and multi-tenancy. Most people know namespacing from linux lxc or kubernetes. This overlaps but also evolves from how micro previously used it. Micro used to use logical namespacing through names prefixed with a namespace. This allowed multiple tenants to exist in a single environment and using explicit naming to identify them.

As we’re starting to see Micro as more of a platform and cloud operating system there was a need to codify this concept across all resources. Namespacing is incorporated across every service so that your services are isolated in the registry and network, so that your data is isolated in their specific databases and tables and so authentication and accounts are tied to individual namespaces.

Namespaces encapsulate accounts, resources and networking routing. Namespaces beyond this are also useful for feature and branch development. It enables subsets of services to be deployed into an isolated namespace for testing. This enables a single environment for development to be used in a real world context and for production to enable feature flagging where needed.