Micro 1.0.0 release and beyond

Over the past 4 years we’ve focused on creating the simplest experience for microservice development. To do this we built a strongly opinionated open source framework called Go Micro and Micro, a microservice toolkit built to explore, query and interact with those services via an API Gateway, CLI, Slack and Web Dashboard.

Last month we released version 1.0.0 of both of these tools. This signifies a huge moment for Micro and the community. We’ve been running in production since 2015 and have become vital for companies like our sponsor Sixt, the german car rental enterprise, who are running hundreds of microservices in production.

Micro enables teams to scale microservices development while abstracting away the complexity of distributed systems and cloud-native infrastructure. It provides a pluggable and runtime agnostic architecture with sane zero dependency defaults.

We’ve considered Micro production ready for a long time but the release of 1.0.0 solidifies the maturity and stability of our tooling. And we believe it’s the right time for everyone to adopt Micro as the defacto standard for microservice development.

Micro has largely grown organically. We’ve not yet actively engaged in speaking at conferences, meetups or any other form of outreach. Instead we focused on solving a real problem and it’s shown in the numbers. 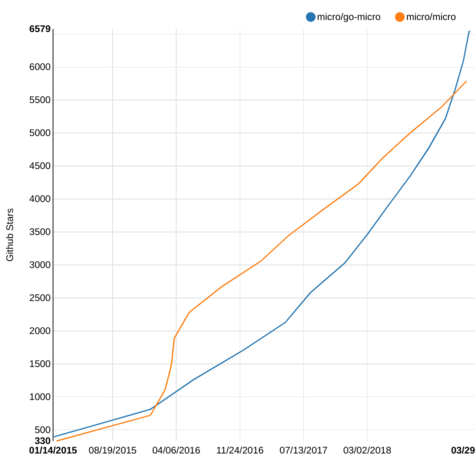 It’s difficult to track active usage of a library or framework but what’s clear from all we can see is that Micro has really resonated with the developer community who want a simpler path to adopting microservices with Go.

The announcement of version 1.0.0 is not just a marker for maturity and stability to run Micro in production but it also signals that this release version will not suffer any further breaking API changes. This now also allows us to take stock of all the learnings of Micro’s usage of the past 4 years, how technology has evolved in the industry and what version 2 might start to look like.

When we started, kubernetes was just in it’s infancy and gRPC had only recently been released. We’re seeing these trends along with service mesh and much more.

Because Micro is pluggable we’ve always been able to adapt to the changing needs of developers while continuing to provide simpler abstractions on top for microservice development. With version 2.0 we have the ability to create an even more frictionless and streamlined experience.

Some of these ideas will revolve around using gRPC by default, allowing a drop-in experience on kubernetes and potentially a runtime for those who don’t want to deal with the complexity of cloud-native systems or any dependency management at all.

We’ll also be thinking about how to move beyond Go to support multiple languages.

Slack has served us well for realtime collaboration but we need a medium aligned with open source to push this much further, to be far more inclusive and to provide a historic record for newcomers to explore easily.

We’re going to work with the community by using GitHub to create an open source location to share ideas, discussion and the roadmap for the Development of features for 2.0 and beyond.

To all those interested in contributing and collaboration, create an issue for feature requests, a pull request to share design ideas and we’ll work together to shape the roadmap.

I want to finish by saying thank you to the Micro community and all who’ve used or supported us over the past 4 years. It’s been a long hard but incredibly rewarding journey with so much more left to do. Without the community Micro would not be where it is today. We’re 1.6k+ members strong in Slack with thousands more across other forums.

Today I released v1 of micro and go-micro. 4 years of hard work. Thanks to all that supported me along the way. https://t.co/blI1pJ3hBl

Thank you for all your support and contributions. We hope we can return the favour by providing everyone the most inclusive and collaborative place for all things microservices.

Micro is the simplest way to build microservices. If you’re thinking about microservice development we want to help enable you on that journey. To learn more check out the website, follow us on twitter or join the slack community.