The open source development of micro can now be sponsored via Patreon. Before we go into the details, I want to first mention what micro is and it’s funding journey.

Micro is an open source project with the mission of simplifying cloud-native development. Technology is rapidly evolving. Cloud computing gives us unlimited scale but leveraging that scale with existing tools is still difficult.

Micro is solving this problem with a developer first focus. The project provides an opinionated set of tools that abstract away the complexities and details of infrastructure so you can focus on what’s really important.

The project was created just over 3 years ago. At the end of 2014, after spending time building distributed systems tools at Google and Hailo, it was clear there was immense value in their tools but they would never be open sourced.

As with most companies these technology stacks were built for the organisation themselves and contained org specific references or assumptions about the infrastructure deeply embedded within the code.

To open source that code would have been a measurable effort. As we’ve now seen, Google and the like have chosen to implement new projects from the ground up with the intention of being open source first.

Back in 2014 though, this had yet to happen and I saw the need for a runtime agnostic set of tools focused on abstracting away the details of distributed systems with an opinionated interface for developers.

This is what led to the creation of micro.

In early 2015 I knew I wanted to pursue micro full time and being at a VC backed company led me to believe the best way to do that would be to try raise money from venture capitalists.

I spent a number of months pursuing this effort with little to show for it. The combination of my lack of experience, traction and location made it difficult to convince investors this was a venture worth pursuing.

VC funding was not in the cards for micro.

In mid 2015 micro was an open source project like many others on GitHub, with little traction and no production use. It wasn’t clear then if it would ever go beyond being just another OSS project on GitHub.

At that point I decided going back to work was the right move. It was however short lived, as a couple months later developers started to show interest in using the project at work. This was enough to convince me I needed to focus my efforts on micro full time.

From late 2015 onwards, I self funded micro’s open source journey, with the hope of finding a more sustainable approach later.

A year into it’s life, micro attracted the attention of Sixt, the German car rental enterprise. Sixt undergoing a technical transformation understood how micro could be leveraged as a competitive advantage. This led to the first Enterprise Sponsorship of micro and a potentially better path to funding it’s long term open source development.

Since then micro has gone on to be used in production by dozens of companies all over the world. Most building very different products yet despite this, they all have one thing in common.

Micro has become the core technology for building their platforms.

It’s been 2 years since micro was sponsored by Sixt. Our hope was that other enterprises using micro would follow suit, enabling us to scale it’s development.

We believe there are a number of reasons this has been unsuccessful and came to the realisation that the approach to sponsorship for micro needed to change.

Patreon is a platform for funding creators. There are a number of other similar platforms out there but seeing the successful funding of projects like Vue.js on Patreon leads me to believe this is the best place for micro.

So with that, Micro can now officially be sponsored via Patreon. 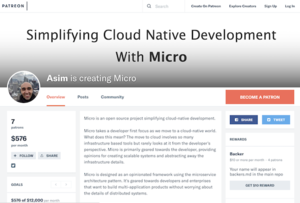 Patreon provides a simple, easy to use and visible place for sponsorship. Micro’s users span from individuals to multi-billion dollar enterprises. Patreon enables us to specify different levels of sponsorship so that anyone can support micro, from as little as $10/month as a backer or $5000/month as an enterprise sponsor.

It’s early days but people have already started to show their support with over $500/month in commitment. I would like to personally thank them for their support. Join Sixt and the many others by sponsoring Micro on Patreon.

I’m excited by all the possibilities enabled by opening up sponsorship to everyone via Patreon but also thinking more and more about the long term future of micro.

Open source sustainability is a hot topic of discussion. It’s something I’m living and breathing on a daily basis. I believe sponsorship is a strong route forward but projects must also look beyond it to be truly sustainable.

Micro today is an open source project funded by sponsorship. In the future we may look toward an open core model. Providing a turn-key enterprise solution.

This would enable a self-sustaining future for micro while allowing it to fund it’s own open source development. Reach out to discuss or learn more.

If you want to learn more about micro, checkout the website or visit GitHub.